Heart-Stopping Action in 360 to Paradise 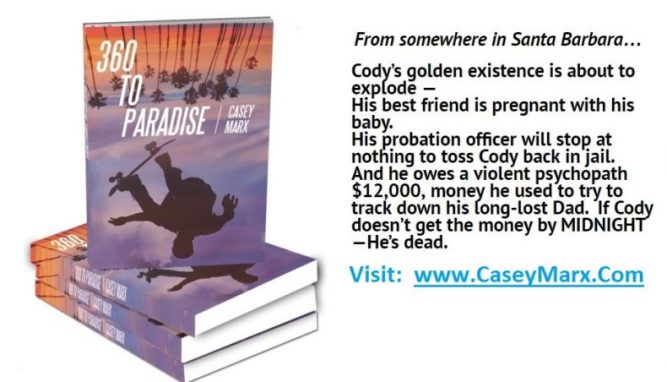 If you’re a young adult or new adult book reader, you may be tired of the usual offerings at the bookstore. 360 to Paradise is a new book by Casey Marx that has a unique twist on your usual YA adventure thriller, with s*x, drugs, teenage skateboarders, and heart-stopping action. While some of the themes explored in the novel may seem a bit far-fetched to most adults, surprisingly, many are situations that concern teenagers today.

The main character is Cody Reese, 18 years old. He’s a good guy inside, much like your average teenage skateboarder, but has more than his share of adult problems to work out first. He’s spent some time in prison, with an unsupportive probation officer who wants to toss him back in jail.

Cody has just gotten his best friend pregnant. And if that’s not enough for a teenager entering adulthood, he must also pay back a violent psychopathic drug dealer the twelve grand that he borrowed from him, or else he’s dead. This all happens in what is called Paradise on Earth aka Santa Barbara, the perfect setting for teenagers who are challenging authority.

This book is a fun romp, and for a few days, you can read it through the eyes of a teenager. There’s a roller coaster of sex, drugs, and basically challenging authority, much like what half the teenagers of today really do.

We get to hang out with beautiful people at the beach, imbibe in illegal substances, drink to our hearts content, and generally partake in sex that doesn’t give us diseases. It’s a reminder that we’ve all been young once, and even if we didn’t do those things as teenagers, we can enjoy through the eyes of Cody.

Cody isn’t all bad. He has even used most of the money he “borrowed” to search for his missing dad. He’s also a pro at skateboarding. He’s good at launching off a fifty foot skateboard ramp and landing headfirst into the cement. You can learn about how to skateboard from this book.

As you turn the pages of this engaging novel in Paradise on earth aka Santa Barbara, you’ll quickly see how the stakes increase, as the $12,000 is due at midnight, and Cody doesn’t have it. There’s a lot of action in this novel, and if you are bored with the usual YA supernatural or urban fantasy, then skip those and read 360 to Paradise instead.

360 to Paradise is the first novel of Casey Marx, a photographer and filmmaker of documentaries for MTV, Discovery, Showtime, and NBC channels. He’s also directed videos for some chart-topping musical performers. He’s veered off the path of his usual projects to try something a bit different. He currently lives in LA, which is the perfect place to gather material for his next exciting book.

We can’t spoil the ending, so you’ll just have to read 360 to Paradise yourself, but we do promise that you’ll never be bored. Aren’t you glad you can live a thrilling drug-fuelled, teenage skateboarders’ lifestyle through the eyes of your new favorite YA character?

May 23, 2017admin
Mosquito Net Chennai Better Than Other Mosquito Repellent Products In The Market5 Ways to Make Strength Gains Past 40